Why Setting Smartphone Limits Might be Good for Your Mental Health, and Your Reputation 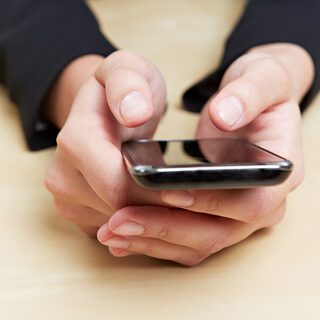 More than half of all American adults own a smartphone, according to the Pew Internet and American Life Project. For small business owners, these tiny beeping, buzzing bits of technology can provide almost constant contact with suppliers, clients and competitors.

But, tapping into (or on) that resource 24/7 could lead to some nasty side effects that could hinder, or even kill, the most successful business.

In fact, I think it’s safe to say that the tiny little piece of technology sitting in your pocket right now could be the most dangerous tool you own, in terms of your online reputation.

If you’re like most people, your smartphone is your security blanket. From the time you get up in the morning until the moment you lie your head down on your pillow at night, you’re actively using your cell phone, or it’s sitting beside you just waiting for the moment that it’s needed.

Consider this: Just 15 minutes after waking, 4 in 5 smartphone users have looked at the glowing screen of their devices, according to research conducted by IDC. After showering, shaving and otherwise preparing for the workday, that little phone can slide into a pocket or a purse for easy transport, but it rarely stays stashed away.

In fact, a study commissioned by Nokia suggests that the average user checks his/her smartphone a whopping 150 times during a 16-hour period. As a small business owner, there are some benefits to this constant connectedness.

In fact, some consumers demand 24/7 access to the businesses they patronize, particularly if they have some sort of problem. For example, Edison Research suggests that 25 percent of consumers expect a response from a company within the same day, if they’ve contacted that company via social media. More disturbingly, 11 percent expect a response within 15 minutes.

This kind of rapid reaction just isn’t possible without a smartphone, and those executives that choose not to react with such speed might also see their client lists dwindle, as Marketing Charts suggests that 38 percent of consumers will develop negative feelings about a company if their rapid response demands aren’t met, and 60 percent of these people will express that unhappiness publically.

Stats like this can keep a small business owner up at night, glued to the glowing screen while tapping away furiously in response to tweets, pings and messages. The response times might be great, but the costs might be intense.

Most freelancers and small business owners go into the realm of self-employment because they love the work, and few regret that decision. For example, a study cited by the Freelancers Union suggests that some 90 percent of freelancers are happier now than they were when they worked for someone else. It’s a rewarding gig.

But, staying plugged in all the time, day after day, can mean spending an estimated 18.5 hours engaged in work tasks, each and every day. That leaves little time for vital, soul-feeding activities like cooking, exercising, spending time with pets or nurturing children. All that’s left is work, and that tight focus might even lead to a dip in creativity and a lack of motivation to keep on innovating.

In addition, there are countless examples of small business owners who have made terrible late-night decisions with their cell phones that have haunted them in the days that follow.

Late-night tweets from Scott Brown might fall into this category, as might the nearly-nude selfie Geraldo Rivera posted last summer (which he blamed on tequila).

If constant connectedness can lead to mental distress and reputation disaster, it’s reasonable to use any sort of technology available to break these bad habits and move forward in a reasonable manner. Ironically, some small business owners lean on technology in order to reduce their dependence on… technology. Apps like Eternity Time Log Lite, for example, can help you to identify the moments that you’re spending on work when you’re (technically) off the clock for the day. This app also comes with distraction-busting features, so you can limit the amount of time you spend peering at your phone while you’re not doing work.

Choosing to go unplugged during social outings is another well-cited cell phone limiting task. By turning off your phone and tuning in to the rest of your life, you might gain some needed perspective. (And, as an aside, you might get a discount at some restaurants, if you leave your phone behind while you eat.) If turning off the phone during dinner seems hard, leaving the device behind during a long-term vacation might seem downright impossible.

But, research suggests that vacations have the ability to boost both physical health and emotional well-being, both of which are vital for any small business owner. Stepping away and limiting social media contact during that time to a few hours might not be ideal, but it’s certainly better than setting no limits at all.

As reputation management experts, we encourage our clients to use these techniques in order to limit their online exposure. After all, if people play it smart online, there’s less cleanup for us to do and smaller heartaches for our clients.

But, if you’ve already done something horrid online, we might even be able to help yet more. When a reputation problem erupts online, it’s common for people to obsessively check their phones and monitor the situation as it unfolds. They respond to each and every comment that appears, fight back against all comers who choose to attack them and rant and rave about the treatment they’re getting online (The Arizona restaurant Amy’s Baking Company remains the best example of this phenomenon, and apparently, the owners of the company continue to behave a bit strangely online. See the latest example here.).

But, each little zinger of a response tends to make the problem all the more visible. A tiny problem can explode to gigantic proportions, when you’re using your cell phone as a weapon. We can help to repair the damage without drawing undue attention to the issue. While you’re resting and trying not to worry (sounds easier than it is, I know), we can work behind the scenes and make the issue disappear.

There’s no need for constant connection, when we’re on the case. Just call us, and we’ll help you get your life back.